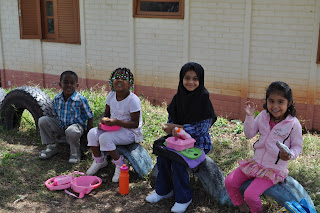 My students right before Christmas Break. 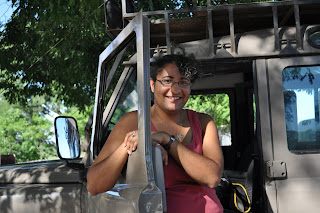 Me at the Farm at Christmas time. 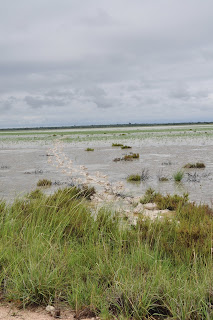 Elephant tracks though the mud.
There will be more pictures in a couple of days!
Posted by Helena Mudde at 12:29 PM 2 comments: 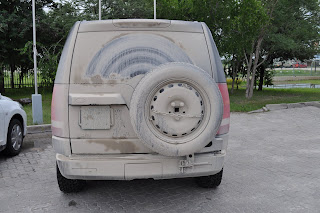 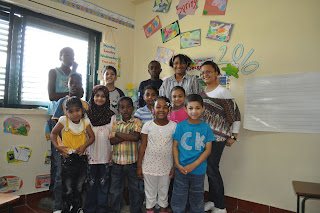 Dear Friends,
I hope that you have all had a WONDERFUL start to your new year. I originally started writing this about two weeks ago but never quite managed to finish (sorry!). So here is the “updated” version!
November- We started out with 11 students and by the end we had 13! We welcomed a Pakistani girl who is 9 years old. She and her family are Muslim and they just recently moved to Lubango. She knew some English before coming so she has been able to jump into the curriculum with no problem. Our newest student is 13 years old and Angolan. He will be starting the 8th grade. He is very hard working, motivated and excited about school and what he is learning, which will make this coming semester lots of fun.
December- We had our first Parent/Teacher meeting at the beginning of the month and it was very encouraging for me to hear how happy and excited the parents are about how the school is going. The last day of school was the 17th, I left Lubango to go and spend Christmas and New Year’s at Tchincombe Ranch with family and friends. It was a wonderful, relaxing time. I knew I was pretty tired but I hadn’t realized quite how tired so it was a good break.
January- I came back to town on the 3rd and spent the next four days helping a friend run around town to get her visa renewed, talking to the church leaders about getting the documents for Mum’s car so that I could take it to Namibia to pick her up, driving to the coast to get her documents renewed, then packing up my house to move when I got back from Namibia and then packing to be in Namibia for two weeks! Needless to say it was kind of a crazy week but I managed to get most of it done. I drove to Namibia with another missionary lady and her son; they had to go for visa renewals and doctor appointments. We left at 3am and arrived in Windhoek at 9pm. It made for a long day. A friend of my Aunt Shelley and Uncle Peter was very kind and opened up his house for us to stay in while we were there, which was a huge blessing. I took Mum’s car to the shop to have an extra fuel tank and rear wheel carrier installed. I received the car back within a few days and did all the shopping and running around and was all ready to go when Mum arrived on the 19th. Mum arrived okay but her luggage did not. They took one of her carry-ons away when she boarded the plane in DC and failed to return until more than twenty-four hours later, by which time it was missing close to $1000 worth of equipment, including an i-phone that I had asked for. We stayed in Windhoek a couple of extra days to see what we could do to follow up with the airline. After two days of driving we arrived in Lubango on Saturday afternoon and Monday we packed the stuff from where I had been living in the car and moved it to Mum’s house at ISTEL. School started again on the 31st and we have already had one week. Not all of the students are back from their holidays in various
parts of the world and we have added some new friends! It is great to be back at school again and the students all seem excited to be there. It is great to be back at school again and the students all seem excited to be there.
Looking Behind and Ahead- It is hard to believe that only a year ago the Lord told me that it was time to move back to Angola to open the school. A lot has happened since last January and I know that without the Lord’s sustaining hand none of this would have taken place. Our next big challenge is building our own facility for the school. We are fast outgrowing the space that we are renting at ISTEL. Please pray for the Lord’s guidance as I sit down with the church leaders to discuss what our next steps should be. At the moment we do not have the money for building but I know that the Lord can handle small problems like money. I just want to be sure that we work within His plan for the school.
In Him,
Helena Foster Fabiano
Blog: helenashappenings.blogspot.com
Phone number: +244936896649
Mailing Address: C/O UIEA
CP 33
Lubango, Angola
Africa VIA PORTUGAL
Posted by Helena Mudde at 12:15 PM No comments: