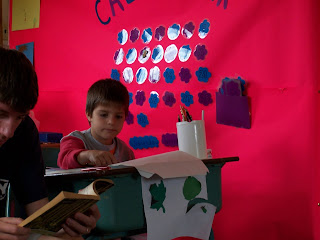 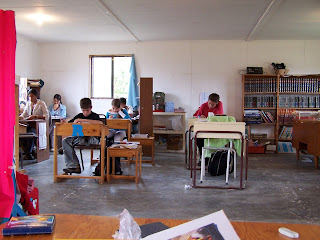 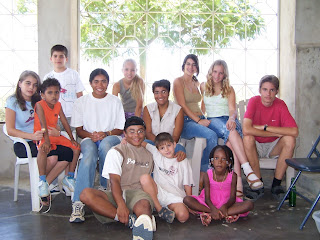 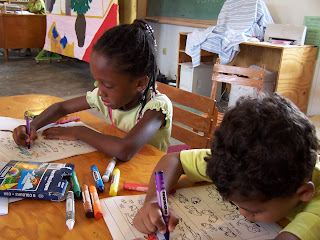 This is what the school looked like before I left in 2004. I can't wait to see what God has in store for us!
Posted by Helena Mudde at 2:27 PM No comments:

Mitcha School was the one-room school house that I attended from 1st grade until I graduated from High School. It was a school primarily for missionary kids but the church and the mission opened it up to children whose parents were working with NGO's and some local children too whose parents wanted them to study in English so as to have more opportunities later on in life
. The first day of school there were five us, my two siblings and I, Seregi, a Ukrainian boy whose parents were working in town at the local hospital and Natasha, whose parents were business people in town. Our teacher was Welsh and she used an American curriculum and supplemented in extra activities and class projects that we worked on together. Seregi had his own Ukrainian program to work on as well as learning English with us. Natasha, who was the same age as my younger brother,  had never been to school before and knew no English but by the end of the year she was speaking almost fluently and doing very well in her school studies as well.
The school grew as the years went by and at one point we had 15 students, a mix of missionary kids, local children and children of expates in town. We always had a great mix of students from all around the world and it was an easy way to learn about other cultures and how to adapt and relate to each other. The biggest benefit was the wonderful witness of Christ's love and acceptance it was to the students as well as their parents. We also had class devotions and a worship/prayer time at the beginning of each day and it was a great way for the students to ask questions and learn about Him. Our class put on a Christmas play that told the Gospel story for the parents and the local community.The school was a great way to build relationships with the people that might never have had the opportunity to really see and understand His love. Over the years several parents and students have come to Christ as a result of the relationships that they built through the school and the example of Christ's love and family that the school was to everyone.


After I graduated from High School in 2004, I worked as the teacher/supervisor of the school. I had two new kindergarten students that did not know any English so I was teaching them English as well as a kindergarten curriculum. I also had 8 other students from 1st grade to 11th. It was not easy all the time but it was very rewarding. That was when God really laid the vision of the school on my heart and it has been my dream to be able to go back reopen it. It is a huge undertaking, and I have to admit that I feel slightly overwhelmed but I know that He has it all in His hands.  I can't begin to tell you how exciting it is to see how the Lord is moving and bringing this together.
If you have any questions about the school, what I will be doing, or any suggestions or if you feel that this is a project that God is calling you to participate in, please feel free to contact me. (336-508-7856 or hffabiano@gmail.com) I am looking forward to seeing the team that God is putting around me.
These are some pictures of when I  was in Angola during the Summer of 2008.